he Sufis and the Alhambra

THE FOUNTAIN AT THE SUFI ALHAMBRA IS THE KUNDALINI KEY

CONTENTS PAGE - SUFI AND SUFISM, JESUS, ZEN, TAO AND TAOISM, YOGA AND PATANJALI, AND TANTRA  ARTICLES OF ENERGY ENHANCEMENT
We talk about the sufi meditation tradition  but we also have a few other web pages, the Sufi Meditation master and Sufis People are Sleeping or Are You Angry, Mr Sufi? OR generously, Sufi is a Feeling of the Heart explained by Osho. Or perhaps you like Zen Meditation Stories or Zen and the Stars or Stories of the Tao by Ko Hsuan and other Taoist Meditations. Or The Yoga Sutras of Patanjali One or The Yoga Sutras of Patanjali Two or Tantra and Tantric Meditations or even the Meditations of the Peace of the Guida Spiritual

Previously we were talking about the principle of Courtly Love which was given to the Knights of the Middle Ages. It is said to have been spread throughout Europe by the Troubadours, students of the Sufis, who sang songs of love, symbolising the love of God. They originated in Spain where Christianity and Islam met.

The help of the Sufi mystics sent their ideas even into the myth of King Arthur.

Many Sufi mystics came from organisations with names like the builders or the lock makers (Naqshbandhi).

Plan of a pool at the Alhambra Granada. The Key and the Lock.

When you go to the Alhambra in Granada, Spain, you come across many symbols of Sufism. Above is the plan of the Pool of water (Rectangle) in front of one of the beautiful buildings there. And a fountain (Circle) with a water channel between the two. The water from the fountain comes out of the little circle in the center of the bigger circle and flows into the pool. And here below is a picture of that fountain at the Alhambra of Granada when we used to live near there, with one of our Students, Dr Thomas Fluellen, whose Energy Enhancement Testimonial is available on our Website 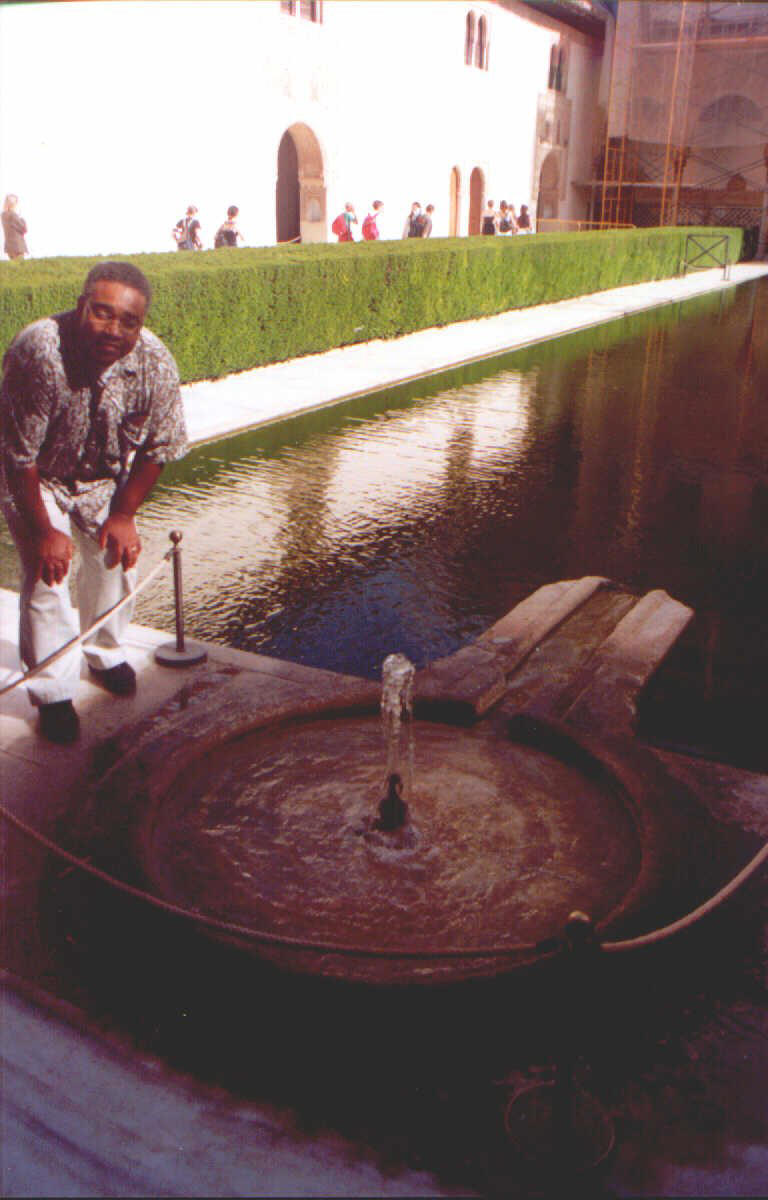 The symbolism is obvious given what has just been told about the sword in the stone and St Michael in an earlier chapter of the Energy Enhancement Book, available to Download Online Now.

The large circle of the fountain above is the Earth. The little circle in its center is kundalini energy which flows in every direction but is then channelled through the Antahkarana, the channel, into the pool, the ocean, the Soul

, the central spiritual sun of Gurdjieff.

The fountain and the channel looks like a Key, does it not? Therefore here is the key of the Lockmakers, the Naqshbandi.

Below is a Shiva Lingham which is the oval stone in the center of the Yoni Circle in the photograph below. It comes from India and the Ancient, 5000 years old Hindu religion.

The base, Yoni looks like the fountain at the Alhambra in Granada above, yes? The Shiva Lingam (Male Genitals) takes the part of the upwelling water of the fountain.

In reality, this is showing the upward female and downward male flows of Energy within the Antahkarana column which symbolises the flow of energy between Heaven and Center of the Earth.

In ritual worship, milk is poured over the Shiva Lingam symolising the downward male flow from the Center of the Universe.

So the Drop Merges with the Ocean..

THE SECRETS OF ENERGY ENHANCEMENT ON THE NATURE OF THE ENERGY FLOWS OF THE UNIVERSE AND HUMANITY COME FROM DEEP AND ANCIENT SOURCES. YOU CAN LEARN A LOT FROM OUR PROGRAMS. 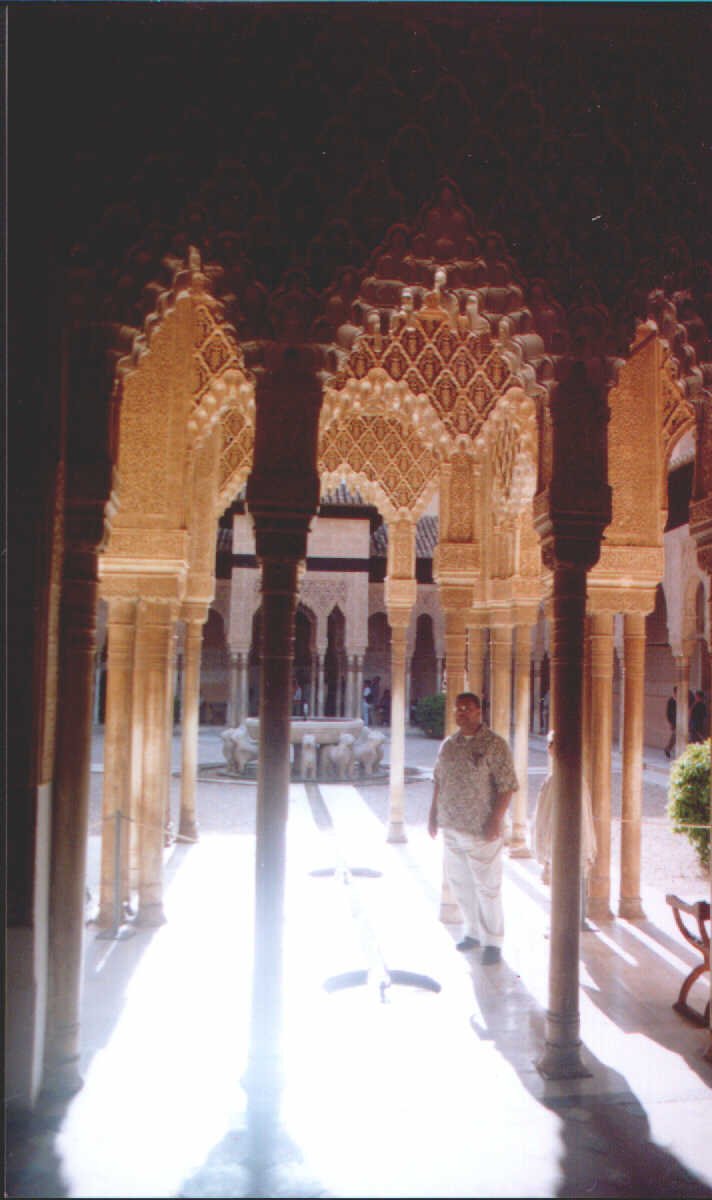 Picture of the Alhambra with Energy Enhancement Student

Further, the Lion Fountain at the Alhambra has Four channels with two circular pools on each of them WITH A FOUNTAIN IN THE CENTER OF EACH ONE linking into the central LION Fountain. The central Fountain is the Logos, the first pool is the Monad, the second pool is the Soul Or central spiritual sun. Back in the shade is you in the foreground. 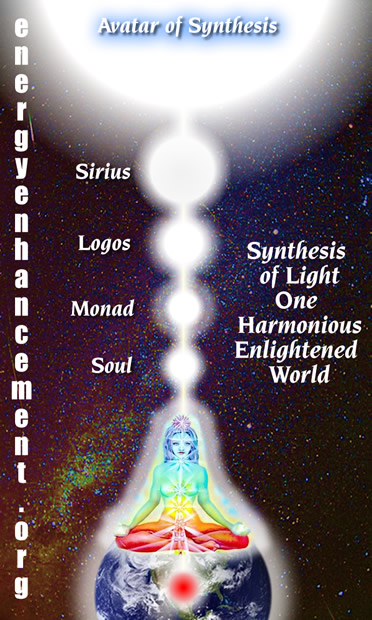 As Hogen told me, "There is no separation" and this is how we interpenetrate each other. 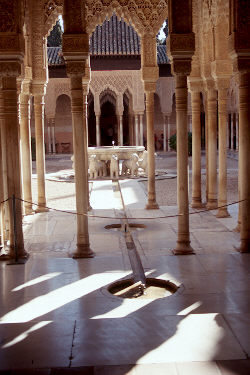 This shows how every person on this planet is connected. How to leave your body and connect. How to become Enlightened. Just go one step higher....in your meditation....

The secrets of Level One of Energy Enhancement inscribed in Stone by the Sufis.

Come to learn these secrets in the Energy Enhancement Online Course or here with us....

Ibn Rushid was a Sufi Doctor who studied music, a famous commentary of which was taught at Paris after being suitably expurgated by the church of the inquisition. This Cordoban was known in the West as Averroes and he excercised a tremendous effect on Jewish thinkers and Spiritual Masters which exist to this day in Girona, not far from our center in L'Escala near Barcelona.

Like his Master, Ibn Tufail, he is said to have passed down a Sufic system alongside the one permitted by the thinkers of the Inquisition of Spain. Ibn Tufail, known to the West as Abubacer after his first name Abu Bakr, was also a physician, philosopher Sufi and ultimately the Grand Vizier of the court of Granada!

His garden and house still exist there in the Alhambra. He took a great deal of interest in the Sacred Architecture, which still affects with Energy (Visit IT!!) it radiates spiritual energy to everyone who goes there (6 Million People a Year), and also in the the designs of the Fountains and other signs, graven in stone at the Alhambra in Granada. Like the Sufi designed Taj Mahal it is one of the 7 Wonders of the World!!!

Some people think that originally, the Alhambra was a Spiritual Sufi School.

But the name of the Architect, Abubacer is never mentioned by the guides there at the Alhambra.

Many Sufi mystics came from organisations with names like the builders or the lock makers (Naqshbandhi).

Whenever I ask about the Sufi created Masons they ask, "Who built the pyramids? The answer obviously being the Masons or the builders which shows the antiquity of these ideas. Each output from the central Sufi source works on one of the chakras. Only one of the organisations, the Naqsbandhis, can integrate the whole human being because the Naqs are the subpersonalities of the Inner Children and the Strategies they use to destroy the lives of you and everyone around you.

We teach how to purify these subpersonalities in Energy Enhancement Level Two.

Obviously the lock, the Cave of Plato, requires a key and the key is the shape of the Fountain at Granada, see above, WHICH SYMBOLISES THE FOURTH INITIATION OF LEVEL ONE OF ENERGY ENHANCE MENT.

The first Four Initiations of Energy Enhancement are available by Video CD. Also the course includes Chants and a Sacred Dance Performance by Devi Dhyani. There are 6 Cds or one DVD playable in your computer in  MPEG4 playable in Windows Media Player and many others. GOTO VIDEO PAGE CLICK HERE!!

One more thing, the shape of the key represents the guided meditation of the Fourth Initiation of Energy Enhancement which you can buy immediately Online by Download if you have a Broadband connection, or on Video CD NOW!!  - To enquire for its price and how to get it,

This is the meditational, real, meaning of Sat Chid Anand, this is the Holy Trinity, the Father, the Son and the Holy Spirit.

This is the meaning of the Emerald Tablet of the first Alchemist, Hermes Trismegistus or Enoch of the Enochian Keys, whose first Formula or Guided Meditation was VITRIOL, see in a previous chapter or See an expurgated version in Energy Enhancement Level One.

The Emerald Tablet of Hermes Trismegistus

The Emerald Tablet of Hermes Trismegistus, written 3000 years ago by this Priest of Egypt, was the ultimate authority of the Alchemists, and here it is.. (with a little comentary by Satchidanand...)

Only the Truth, certainty, ATMAN, without untruth, without any negativity exists in the center of the Universe. (the Central Spiritual Sun of Gurdjieff)

What is above is as below. What is below is like what is above. (We are part of that unchangeable truth at the center of the Universe, we can place our attention on any of the chakras)

This unity, this integration is to be attained. (by methods like Energy Enhancement)

Everything is formed by meditation on this Truth, this Unity. (Sat means truth or the Father, connected to your crown chakra)

All things arise because of this Truth this Unity. It is the initial Cause.

Its parents are the Sun and the Moon.

It was bourne by the wind (Or Ananda, the Holy Spirit, the Antahkarana which is a line of energy which connects all these internal and external chakras)

And Nurtured by the Earth (The Center of the Earth, source, fountain of Kundalini. Connected to your Base Chakra)

Every Wonder comes from it and its power is complete.

The palpable separated from the impalpable.

Through meditational wisdom it can be made to change direction and rise slowly from the Earth to Heaven (This is the Key, the antahkarana, the rainbow bridge to the other shore of the Zen Buddhist Heart Sutra) (This is the Circulation of the Energies or Initiation Two of Energy Enhancement)

Then it descends to the Earth combining the power of the Upper (Center of the Universe, the Central Spiritual Sun) to the Lower (The Center of the Earth, IT CIRCULATES!! THE TAOIST Macrocosmic Orbit, The Energy Enhancement Supra Galactic Orbit,!!)

Through this guided meditation, you shall have the Illumination and Enlightenment of all the Earth (We, over the centuries, through this meditation, will increase the evolutionary, Spiritual Energy, vibration, of this Planet and everyone on it!!) and Darkness (negative energy) will disappear.

This is the power of all strength. - it overcomes which is delicate and and penetrates through solids.

This was the means of the creation of the Earth by the central spiritual sun.

And in the future all evolution, wonderful development,  will come in this way.

I am Hermes Trismegistus so named because I exemplify these three elements of Wisdom (Sat Chid Anand, the Holy Trinity - Father Son, Holy Spirit, or the Sun, Earth and their connection the key, the Antahkarana) I have incorporated them within my being. I am That!! You are That also!!!

And thus ends the revelation of that which I AM, - The Central Spiritual Sun!!!


1. Get into Intense alignment with Your Own Kundalini Energy and Immediate Access to the Meditative State.

2. Remove your Energy Blockages with The Circulation of the Energies, the Kundalini Kriyas, Ancient Taoist Energy Circulations which have worked effectively for 5000 years to help all towards ENLIGHTENMENT.

3. The Grounding of all your Negative Energies through Alchemical VITRIOL - Become Incredibly POSITIVE and ENERGETIC!!

4. Alignment with Your Higher Self - INCREASE YOUR IQ, INCREASE YOUR LUCK, ACCESS YOUR HIGHEST ENERGIES!! ACHIEVE WHAT YOU WERE PUT ON THIS PLANET TO DO.

5. Learn how to USE and Increase the LOVE of Your Heart Center to ZAP YOUR NEGATIVE EMOTIONS AND DEVELOP PSYCHIC POWERS TO HEAL YOURSELF AND OTHERS.

8. ENERGY ENHANCEMENT Techniques are the source of all Successful spiritual training courses over the last 5000 years. Become a Jedi Master, a Gandalf, a Transmitter of the FORCE a Bringer of the Light!!